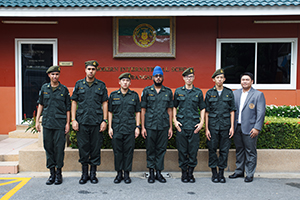 MISB is proud to introduce and support Thai Students through their Military Training –             Ror Dor. Thai Students in Years 10-13 form part of this training ably supported by our Thai Headmaster Mr. Sapsiri Sawatdipap.

Ror Dor also known as Army Reserve Force. Students are junior soldiers under the control of the Royal Thai Army. The Junior Soldiers were first established by Field Marshal Pibulsonggram in 1934 to support the Royal Thai army. In the present day, because the Junior soldiers were disestablished, the Army Reserve Force was opened to Thai-School Students and Thais from International School students to join. The minimum requirement is that the student needs to be a Thai citizen and pass the given test which is 800m running, 25 push-ups and 32 sit-ups. 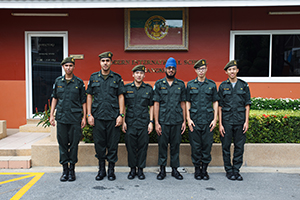 The integrated nature of this programme has enabled the students to continue their studies uninterrupted, thereby managing their academic and co-curricular activities as well. MISB is proud of its first batch of 6 Ror Dor students.

Students who graduate from the three years of military training can request exemption from compulsory National Service and gain appointment as a Sergeant in the Army Reserve Affairs Centre.

A student who has completed one year or two years of training while in school can continue the third year at the University, however it has to be three years in succession.